Now is the time to build a stronger, more resilient Cowichan Valley.

We need to embrace bold ideas to build a more resilient, equitable and sustainable Cowichan Valley. There are so many exciting, evidence-based policies that will make this happen. We just need the political courage to implement them.

Cowichan Valley is an incredible place, full of people with exciting ideas and a deep love for the place they call home. When we focus on coming together around the future that we all want, we can achieve great things.

We need an economic renewal that won’t recreate the affordability crisis and growing inequality that existed before COVID-19. We must stop subsidizing the fossil fuel industry and invest in clean energy, value-added resources, and the creative economy. We need to embrace the exciting developments in education, social, and infrastructure policy happening all around the world and put in the hard work required to make them happen.

My experience in Shawnigan and in the Legislature taught me that just because something is unprecedented, doesn’t mean it is impossible. When we elect representatives that think creatively, that aren’t beholden to special interests, and that focus on data and evidence, I know we can achieve the future we all want for our communities.

Sonia Furstenau grew up with a strong sense of the importance of democracy. As a child, she travelled with her father to his native East Germany. It was there she realized that democracy is something that must be nurtured and protected.

After moving to B.C. at the age of 20, Sonia studied at the University of Victoria, where she completed her BA and MA in History, and her Bachelor of Education degree. She has worked as a waitress, a bookkeeper, as the National Administrator for Results Canada, and as a high school teacher in Victoria and Shawnigan Lake. She is the proud parent of three children and two step-children.

In 2013, Sonia learned that the provincial government was considering granting a permit to a company to dump contaminated soil in a quarry at the headwaters of her community’s drinking watershed. Sonia began organizing alongside her community, questioning the evidence behind the government’s decision to issue the permits. In 2014, she was elected Area Director for Area B of the Cowichan Valley Regional District.

In 2017, after years of hard work and advocacy, the Ministry of the Environment did something unprecedented: it revoked the permit. Months later, Sonia was elected as the first B.C. Green MLA for Cowichan Valley. In October 2018, she stood with the Environment Minister as they introduced legislation to reform the province’s use of professional reliance, the broken system that led to the Shawnigan permits being issued in the first place.

As a B.C. Green MLA, Sonia served as the lead spokesperson for seven different government files. She has successfully advocated for changes to the child welfare system; worked with the government to make reforms to environmental legislation and to develop childcare and early childhood education programs; and stood up against the government’s tax breaks to the fossil fuel industry.

Sonia lives in the Cowichan Valley with her husband Blaise and their children.

Sonia is a proven leader.

I thrive on bringing people together and getting things done. We’ve accomplished a lot in the past three and a half years since I’ve been your provincial representative, but there is more work to do - we are just getting started. 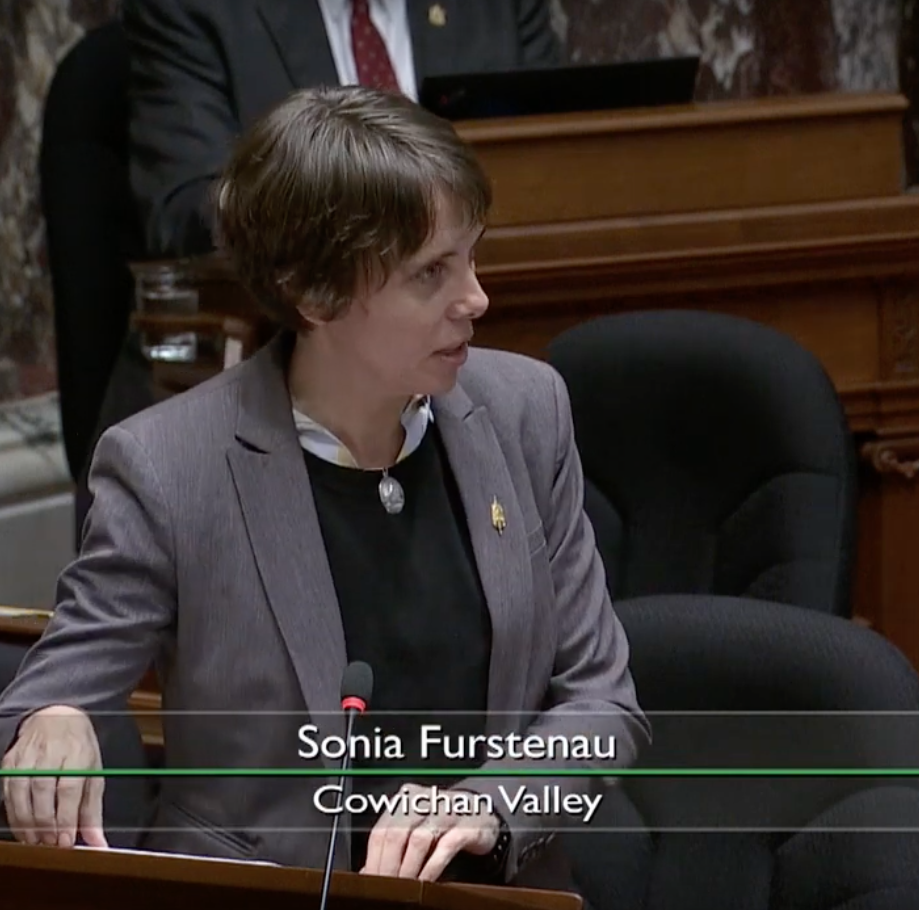 In my three and a half years as MLA for Cowichan Valley, I have worked collaboratively to improve environmental and social policy, make the legislature more transparent and accountable, and model a new kind of leadership in Cowichan Valley.  I’m proud to have championed legislation to require better evidence-based decision-making in our resource development approval process; development of child care and early childhood education programs; and reforms to reduce removing Indigenous children from their families.

Area Director for the CVRD

Before being elected at the provincial level for Cowichan Valley, I served as an elected Area Director for the Cowichan Valley Regional District. During my term, I successfully delivered several infrastructure and community engagement projects, and helped lead my community’s efforts to protect our drinking water.

I’ve helped lead many organizing efforts at the community, national and international levels. I have lobbied in Washington, DC and Ottawa for climate policy; helped lead the fight to save our community’s drinking water in Shawnigan Lake; and been involved in many different organizations fighting for poverty reduction and other social and economic justice issues.